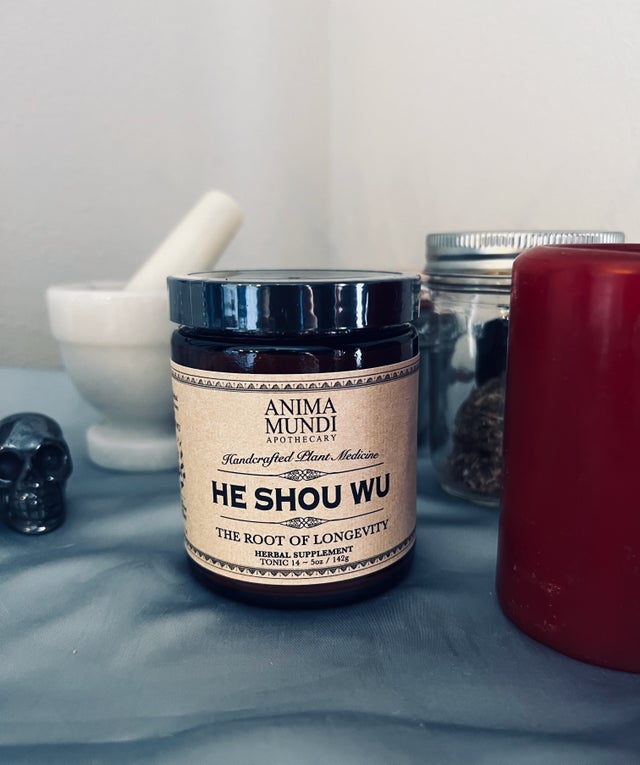 The Root of Longevity

This is one of those holy roots that has a whole lot of documented uses since ancient times, as well as being revered by the modern scientific community. He Shou Wu, Polygonum multiflorum, is a popular herb in traditional Chinese medicine. Commonly known as He shou wu in China and Fo-ti in North America, studies have shown this herb to be beneficial in the treatment of cancer, supporting diabetes, hair loss, hardening of the arteries, and neurodegenerative diseases. Traditionally, it's also revered as a spiritual herb, known amongst monks and healers to boost spiritual potency.

Healing Benefits of He Shou Wu found in scientific studies:

- Anti-inflammatory: The TSG and emotion in Fo-Ti has been studied for its decrease in inflammation. Emodin protects microglia cells in the brain from inflammation due to lipopolysaccharides through AMPK/Nrf2activation [R].

- Promotes Immune Function: The sugars (rhamnose, arabinose, xylose, and glucose) and anthraquinone glycosides found within Fo-ti can improve immune response and overall immune system function (immunomodulatory effect). Fo-ti boosts the immune system by increasing the production of T and B cells, and improving the activities of the immune cells, as well as increasing the secretion of the inflammatory tumor necrosis factor. Further, Fo-ti increases the activity of natural killer (NK) cells [R, R].

- Anti-Viral: Fo-ti exhibited anti-HIV by preventing the virus from entering lymphocytes in a cell-based study [R].

- Neuroprotective effect: Studies show that it may help with Alzheimers Disease

A Note on He Shou Wu:

+ Proper processing of the He Shou Wu is know to greatly reduce its impact on the GI tract, and particularly the liver. Traditional processing involves a decoction, which is known for significant changes in its chemical profile, which inevitably influence the associated pharmacological properties of HSW. It’s raw form, which is known to cause nausea and diarrhea, is actually used in Traditional Chinese Medicine for particular functions such as for detoxification, eliminating carbuncle, malaria, and loosening the bowel, whereas the decoction is used for tonifying the kidney and liver, supplementing essence and blood, blackening hair, strengthening bones and muscles, eliminating dampness, and reducing lipid. (R)

+ Although He Shou Wu is usually used to treat various liver diseases, an increasing number of cases of potential HSW-induced hepatotoxicity resulting in severe drug-induced liver injury. Chinese herbal medicine, HSW is a multicomponent synergistic system, which plays both therapeutic and toxic roles in humans. It is used for strengthening and detox, yet it produces a biphasic effects (meaning it can cause both liver injury and liver protection). (R)

+ Taken at a regular small dose, with complementary liver supportive herbs, reduces its potential hepatotoxicity, and enhances its esteemed vitality effects in the body.

As a typical tonic medicine found in Chinese medicine and other healing traditions in Asia, the clinical utility of He Shou Wu largely depends on processing methods. The hepatotoxicity of HSW is not easily detected when used at recommended doses and when properly processed as a decoction. In the Chinese Pharmacopoeia the predetermined daily dose of decocted He Shou Wu is 3-6g, about 1/2-1tsp.

The main chemicals responsible for the hepatotoxicity of HSW are free anthraquinones such as emodin and physcion [R]. Which are at higher percentages when consumed in its raw form. Because it also may mimics estrogen in the body, it is not recommended for those dealing with estrogen positive cancers, or excessive estrogen count overall.